The webcast for Dr. Alley’s presentation is now up, so I recommend watching the video. It is concerning the role of CO2 on climate over geologic time.

As my own side note, Alley is one of my favorite scientists…he’s pretty much “the guy” when it comes to ice core work and has done a lot with paleoclimate (over the ice core record especially), abrupt climate change, glaciology, and sea level rise. He’s a very interesting character who always puts things in a nice perspective, and often humorous ways of teaching (e.g., his Johnny Cash geology lesson).

Posted in paleoclimate, scientific basis, what is global warming?

A survey of LGM-present oceanography and climate

Yesterday, I had the opportunity to attend a colloquium seminar where Zhengyu Liu of University of Wisconsin-Madison gave a presentation on a couple of topics. One was on his recent paper which I discussed not too long ago concerning transient simulations of the the deglacial climate evolution. He also discussed the stability issues of the Thermohaline circulation and how intermediate models of AMOC tend to exhibit hysteresis behavior while fully-coupled AOGCM’s do not. I won’t touch on that but I’ll touch briefly on a few key points concerning the time period of roughly LGM to Bolling Allerod and some background. The regional and global-scale responses of atmospheric warming and their causes are explained better in my first post which is linked above. I also discuss the time period of LGM-BA in a bit more detail in case readers are unfamiliar with these events.:

END_OF_DOCUMENT_TOKEN_TO_BE_REPLACED

More on Abrupt Climate Change: The H1 to BA transition

One of the most interesting parts of the paleoclimate record over the last 100,000 years, is the series of abrupt climate changes prior to the Holocene that have occurred on very rapid timescales, ranging from years to decades (Alley et al, 2003). These changes were large, fast, and occurred when the climate was pushed across certain thresholds.

Of particular note, is the well over 20 Dansgaard-Oeschger events since the last interglacial. Typically, a rapid warming on timescales of decades was followed by slower cooling, rapid cooling, and then a brief period of little temperature change. A value near 1500 years between these events is common, although sometimes there are skips and so the spacing could be a scalar multiple of near 1500 years. Successive D-O oscillations become progressively cooler as the cold-based ice sheet grows in Hudson Bay, and when the base of the ice thaws, you get a Heinrich event surge that dumps large number of icebergs that calved from the Laurentide ice sheet into the North Atlantic, via the Hudson Straight (or perhaps other sources such as the Icelandic and British Isles ice sheet). This succession of progressively cooler D-O events, punctuated by a Heinrich event (until the next cycle begins or the climate becomes too warm for an ice sheet to grow) is a Bond cycle. These events are common before the Holocene which led to a climate punctuated by high-frequency variations and a much more variable situation than that which humans have enjoyed over the past 10,000 years.

END_OF_DOCUMENT_TOKEN_TO_BE_REPLACED

It is well recognized that warming from a cold glacial period to a warmer interglacial is accompanied by increases in Carbon Dioxide concentrations, which at least amplified Milankovitch-induced forcing over millennial timescales. Atmospheric CO2 concentrations were around 100 ppmv lower than pre-industrial values during deep glacial climates. A key question in paleoclimate studies that is still not sufficiently addressed is how changes in solar insulation could have forced the feedbacks in atmospheric chemistry observed in proxy records.

END_OF_DOCUMENT_TOKEN_TO_BE_REPLACED

Abrupt Cooling at the Eocene-Oligocene boundary

The Earth has gone through significant climate change over the last 100 million years going from the mid-Cretaceous “greenhouse” to the late Cenozoic icehouse. Roughly 33.7 million years ago, at the Eocene-Oligocene boundary (EOB), the world would begin to develop permanent ice sheets, particularly the East Antarctic. This accompanied the so-called Oi-superglacial driven by a reduction in atmosphere CO2 concentrations.

END_OF_DOCUMENT_TOKEN_TO_BE_REPLACED

A busy week for paleoclimate

The IPCC AR4 report has concluded that atmospheric carbon dioxide has reached levels that are higher than anytime during the past 650,000 years. That was a recent update to the literature just several years ago which only went back 420,000 years. These results are supported by ice cores from Antarctica which trap bubbles of ancient atmosphere and allow for confident reconstructions of ancient climates. In the latest issue of Nature, members of the European Project for Ice Coring in Antarctica (EPICA) present the latest, and longest, record from ice cores which extend to 800,000 years. The glacial-interglacial, carbon dioxide, and methane cyclicity remain similar to the previous reconstructions, and the correlation of greenhouse gases to temperature also remains very firm. The latest graph on this is below, from Lüthi et al 2008 (click for enlarged image). 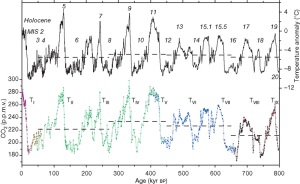 Of interest here, is the unusually low levels of carbon dioxide during the two earliest glacial–interglacial cycles. The authors seem confident that they have the CO2 levels right, which extends the pre-industrial CO2 range from about 172–300 ppmv. There could be a long-term CO2 increase by about 25 ppmv from 800 to 400 kya BP, and a long-term decrease of 15 ppmv during the past four glacial cycles, which the authors suggest may be indicative of long-term variations in the carbon cycle on orders of hundreds of thousands of years. CO2 may have reached an absolute minima at 667 BP, though there is slight discrepancy between CO2 concentration measured at University of Bern (172 ppmv) and Grenoble (178 ppmv).

In the recent literature, as well as in the supplementary information in this paper, the infamous “CO2 lag” may be overestimated by some hundreds of years, so the 800 year lag at Termination V may be something like 300 years. In interesting case is during MIS 14.2 (~550 kyr BP), CO2 preceded temperature by about by a little over 1,000 years. Like many other of the ice core record papers which are blown out of context, the authors emphasize the role of CO2 as a positive feedback on temperatures supporting its greenhouse role.

Meanwhile, methane (See Loulergue et al) has fluctuated between around 350 and 800 parts per billion by volume (ppbv) over glacial-interglacial cycles, but over 1,770 ppbv during present day. Interestingly, methane seemed to follow the eccentricity signal more during the earlier cycles, but the methane levels appear more precession-paced since ~400 kya, which is likely due to changes in wetlands, monsoon systems, and ITCZ.

In other news, and going far away from the ice core record to the Paleocene-Eocene boundary around 55 million years ago, δ18O records show an abrupt spike when temperatures soared by 8° to 10°C in high-latitude sea surface temperatures, and 4° to 5°C in bottom water temperatures and tropical SST’s (Zachos et al., 2003). A major negative carbon-13 isotope bump also shows up in proxy records, signifying a massive release of isotopically light carbon, which gives clues to the cause of the dramatic temperature anomaly. Possible sources could have been from methane (decomposition of clathrates on the sea floor), CO2 outgassing from volcanoes, among other things. The mass extinction of benthic species at the time was probably a combination of thermal stress and ocean acidfication. In this latest paper by Panchuk, Ridwell, and Kump, the authors suggest that methane alone could not have caused the calcium carbonate dissolution in the oceans estimated from sediment layers, so a large external forcing from CO2 (perhaps a carbon pulse of ~6800 gigatons) helped out. This would enhance the greenhouse effect significantly, but a lot of that carbon would be removed by the oceans within a thousand years reducing the effect, but data suggests that the PETM lasted perhaps 200,000 years. A very large impulse of carbon would have been needed to sustain the warming over millennial timescales given that ~80% of it would be removed by the oceans in around 1,000 years.

Interesting week. Not too much to be excited about though as we keep burning fossil fuels, and nothing new for policy makers to hear.