The blog Watts up with That is famous for its attempt to reinvent climate physics on Earth, and now they want to reinvent astrophysics as well. Steve Goddard, a frequent poster at WUWT, now has a couple of posts (here and here) as well as write ups by Lubos Motl, about how the extreme temperatures on Venus are not caused by the greenhouse effect, but rather the 90 bar atmospheric pressure on Venus. It essentially argues that the “extra warming” by that we see on Venus is mostly due to the adiabatic lapse rate. As with many posts at WUWT, this radical idea which contradicts any textbook on planetary climate has been accepted without question by most commenters. Unfortunately for the massive attempt at a paradigm shift that is underway, they are all wrong.

For a very good overview of some of the basic features of the Venusian atmosphere, I suggest this 2001 paper by Bullock and Grinspoon who discuss the very important role of CO2, as well as the various competitive roles of H2O and SO2 in its climatic history. Goddard, Motl and many bloggers feel that this description is all wrong based on fundamental physical misunderstandings.

From high school mathematics, we know that a straight line can be represented by the equation y=mx + b, where m is the slope, and b is the intercept of the line. It’s important to see that the slope alone cannot tell you the absolute value at a single point, only the difference between two points. It is this that neither Motl nor Goddard can grasp. The lapse rate in an atmosphere without a condensable substance can be derived fairly easily. Starting from the first law of thermodynamics:

and from taking the derivative of the ideal gas law for a mole of substance,

Note that R = cp – cv. Re-arranging, and for an adiabatic process,

Using the hydrostatic equation, where

where the exponent is approximately 0.286 on Earth and about 0.23 in a pure CO2 atmosphere. The “rad” subscript designates a mean radiating level. On Venus, the ideal gas law does not hold well in the lower atmosphere, but nonetheless the lapse rate can be found to somewhat resemble that of Earth

What the IR heating from the greenhouse effect does is primarily to establish the intercept (e.g., the lower tropospheric temperature) while on Earth convection essentially keeps the atmosphere near some adiabat and thus establishes the vertical structure of the atmosphere. See below for example:

Viewed in terms of mass the tropopause isn’t deeper than on Earth. On both planets, some 90% of the mass is contained within the troposphere. There are two ways to get a very high tropopause though: a low lapse rate or very large optical thickness. The latter is what is important for pushing up the Venusian tropopause so high, well above Earth’s. This rate of change establishes the difference between two layers in the atmosphere. Strictly speaking, a greenhouse effect does not require a surface (a greenhouse effect still exists on the gaseous planets); one simply needs to extrapolate along the adiabat to some new level below prad and using Poisson’s equation one can find the temperature at that level. For Venus, one can see that prad is quite high, since transmission is related to the opacity of the atmosphere in a declining exponential function. This, among many other things, is Goddard’s misunderstanding within his perspective for why the greenhouse picture is “absurd” in his first post. Also, the Venusian surface does receive a relatively small trickle of solar radiation to the ground, and actually this small trickle is very important for establishing the temperature structure of the planet.

There are three lines depicted in the the second graph above. Line “A” and “B” represent the same sloped adiabat, which means that the difference in temperature between the surface and some point in the atmosphere is the same. The difference is of course where the line is shifted which cannot possibly be due to pressure, but rather through energy balance…either because the planet with line “B” has a higher solar constant, a lower planetary albedo, or a stronger greenhouse effect. This falls right from the basic energy balance equation, where

for a planet with a fully transmissive atmosphere (i.e., prad = psur). The greenhouse effect is thus defined as

Since Venus radiates at the surface at several thousands of W m-2 and yet the outgoing radiation is even less than that of Earth, this shows how important a strongly opaque atmosphere influences the planetary surface.

Line “C” in the figure represents a planet with an even higher surface temperature, although with a more mild temperature gradient between two points on the line. This is actually how the negative lapse rate feedback works (which partially offsets the water vapor feedback), since the top of the atmosphere has now experienced a greater change in temperature than the surface, and can become a better emitter. In no case can the lapse rate be the reason for the very high surface temperature on Venus. It is simply not physical for the planet to be hotter than that value set by the incoming absorbed solar radiation in the absence of a greenhouse effect or some internal heat source

Note that pressure does matter for the greenhouse effect. Continuum opacity due to CO2 pressure-induced transitions in the Venusian atmosphere are very important. On a planet like Mars with little atmosphere, very little broadening from collisions makes CO2 a much less effective absorber over a variety of wavelengths. Bottom line is CO2 becomes a much better greenhouse gas at high pressures. In addition, scattering of infrared radiation, unlike Earth, plays an important role in the energy balance.

Another issue that has popped up in discussions is the logarithmic relation between CO2 concentration and radiative forcing. Some have even tried to extrapolate Venus concentrations using a logarithmic law to get some guesstimate for Earth-like sensitivity. This is really apples and oranges. One issue is that you lose the logarithmic relationship at high enough CO2 concentrations. If you put in too much CO2, you make the overall width of the principal absorption region wide enough that you get out into a different shape of envelope which would happen at a significant fraction of Earth’s atmosphere (say, 0.2 bars or so) let alone on Venus. On Venus, a lot of weak bands that are inconsequential on Earth become dominant in determining the changes in OLR. It’s also worth keeping in mind, that CO2 absorption at high wavenumbers which are important on Venus but not on Earth come into play. These are crucial for understanding the main absorption on Venus, and unfortunately, high wavenumber areas are not satisfactorily resolved by databases such as HITRAN. 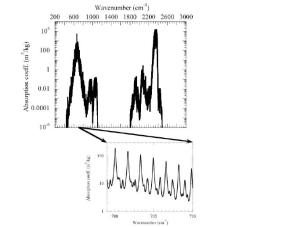 From R.T. Pierrehumbert, Principles of Planetary Climate, in publishing progress

As a conclusion, the blogosphere has not revolutionized the field of planetary climate or the greenhouse effect. They have made elementary mistakes that would be resolved by taking a basic undergraduate course in atmospheric thermodynamics. Neither Motl nor Goddard understand what they are talking about, and this is just another fad that will be forgotten about soon.