Easterbrook and the coming ‘Global Cooling.’

Prof. Don Easterbrook has a piece Global Cooling is Here:Evidence for Predicting Global Cooling for the Next Three Decades that has been getting some attention in the blogosphere in which he claims that global warming has ended and that global cooling will occur over the next several decades.  Easterbrook’s analysis is hopelessly flawed, and one is left to wonder just why he would intentionally shoot down his own credibility with such sloppiness. Any support of this work on internet sources is not a support of any actual science or data, but an appeal to authority.

Despite no global warming in 10 years and recording setting cold in 2007-2008, the Intergovernmental Panel on Climatic Change (IPCC) and computer modelers who believe that CO2 is the cause of global warming still predict the Earth is in store for catastrophic warming in this century.

The first thing I need to pause about is this kind of tone in supposedly “scientific pieces.” See #34 in Quantifying skeptical arguments

This type of language is not used in the IPCC report, and strawman attacks won’t change that. This sort of wording is a clear indicator that you are reading propaganda, not science. If high-schoolers use this type of language in an essay I might let it slip, but for people who are supposed to be taken as an authority on a subject, it is an instant shot on credibility and a good sign the writer has an agenda.

Yet this needs to carry some sort of uncertainty attached to it. “By 2100” is a mark that not only carries with it the uncertainty attached with climate science, but the question marks of future emissions which involve political and economic uncertainty. This number could be substantially lower if man decides to act on fossil fuel emissions.

All of this is predicated on the assumption that global warming is caused by increasing atmospheric CO2 and that CO2 will continue to rise rapidly.

Radiative transfer is not an “assumption.” The physics is not the most easily understood thing, but it’s not very hard to learn why more CO2 must cause additional warming. Scientists did not just pull “CO2” out of a hat, or throw it in the mix because nothing else worked. The infrared absorption properties are undisputable.

However, records of past climate changes suggest an altogether different scenario for the 21st century. Rather than drastic global warming at a rate of 0.5 ° C (1° F) per decade, historic records of past natural cycles suggest global cooling for the first several decades of the 21st century to about 2030, followed by global warming from about 2030 to about 2060, and renewed global cooling from 2060 to 2090 (Easterbrook, D.J., 2005, 2006a, b, 2007, 2008a, b); Easterbrook and Kovanen, 2000, 2001). Climatic fluctuations over the past several hundred years suggest ~30 year climatic cycles of global warming and cooling, on a general rising trend from the Little Ice Age.

This makes no sense. Essentially what Easterbrook is doing is attempting to use the historical paleo-record as a template for future change, while a) assuming that anthropogenic influences are indeed not going to be a factor, b) not discussing the causes of the past climate fluctuations. Historical records for the little ice age to present aren’t much good for predictions if you know the underlying system is changing, and using this to extrapolate into the future is absurd– really, a tenth grader would know better. The little ice age involved solar and volcanic influences, while the modern warming trend is something else and that something else will change over the coming century. What historical records may be good for is for constraints on climate sensitivity, constraints on the magnitude of internal variability, but they say nothing about the attribution of modern change or how external forcings will change. 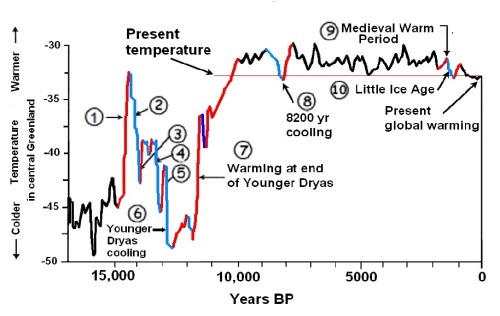 This paragraph contains mischaracterizations of those previous climate changes. For one thing, the global average never changed by 10-20 degrees in decades, and certainly nothing of that extreme in the past 15,000 years. The graph used by Easterbrook looks at temperatures in Central Greenland, which were indeed marked by many abrupt changes during the last glaciation. The causes of these large temperature jumps is mostly a question of change in how heat was moved around the climate system, which is different than a global-mean temperature increase which was probably much closer to zero than it is today. This is the “see-saw” pattern between the North and South as a result of changes in ocean circulation. As far as our understanding is concerned with these events, these are exclusive to glacial conditions and there is no evidence of any strong signal in the Holocene, including today. Since then, we are in a permanent warm state, which is similar to a permanent Dansgaard-Oeshger event. The Holocene has a different pattern of ocean circulation than glacial times with convection in the Greenland-Norwegian Seas, and small variations of fresh water input will not accumulate. Any suggestion that these patterns are responsible for the warming up until 1998 needs to be shown, not speculated upon, because it contradicts almost everything we know about greenhouse physics AND those previous oscillations. Concerning how it was impossible for atmospheric CO2 input from humans to have triggered these changes, duh. No one thinks that temperature cannot change without CO2 being involved, just that the converse is not true.

The next part of this article mentions glacier advances and retreats in one part of the world, but this is irrelevant to the reality of AGW or his alleged future cooling.

Now a decade later, the global climate has not warmed 1° F as forecast by the IPCC but has cooled slightly until 2007-08 when global temperatures turned sharply downward. In 2008, NASA satellite imagery (Figure 6) confirmed that the Pacific Ocean had switched from the warm mode it had been in since 1977 to its cool mode, similar to that of the 1945-1977 global cooling period.

This is an additional 45 points from #26 and #36 in “Quantifying Skeptical Arguments.” The 2007-08 “cooling” lasted a couple of months and had to do with a La Nina. That’s called weather, and we expect weather even with an underlying AGW signal. Trying to use this as some evidence of a coming cooling trend is delusion at best.

There is no evidence to suggest a switching of “warm” to “cool” phase will alter global mean temperature, for the reason that again, the PDO is an internal mechanism that moves heat around, it doesn’t add heat to the climate system. The PDO itself is defined as not having a trend, but during the ‘warm phase,’ the majority of the Pacific is actually cooler than normal. These terms have more to do the value and are “names” rather than physical descriptions of what happens. Easterbrook would have us believe this is all responsible for mid-century “cooling” while ignoring aerosols, volcanoes, or anything else.

Secondly, the IPCC projected about 0.2 C/decade, but over time intervals of a decade this has an uncertainty which is roughly the same as the projection value itself. For instance, at Gavin’s post on what IPCC models really say, he writes: “For 7 year trends (beginning of 2001 to end of 2007), the model spread is approximately N(0.2,0.24) in deg C/dec.” This notation means that the mentioned period has a mean of about 0.2 C/dec and a standard deviation of 0.24 deg C/decade. There would be slightly less for 10 years. A predicted 1 degree F rise is imaginary and not found in the latest IPCC AR4 report, but just as bad, there is no range of error to account for natural variation.

In short, there is absolutely no science in Easterbrook’s article, and much of it is based on misrepresentations of the IPCC and ignorance of the climate system he is analyzing. His implication that a changing PDO almost assures us for a coming cooling period is just wishful thinking, but he doesn’t understand the difference between a “signal” and “noise” or what the PDO actually does. He effectively assumes that greenhouse gases have had minimal impact, and will do so, without quantifying this argument. As such, there is no basis for his conclusion that global warming is over and that global cooling is awaiting us.

29 responses to “Easterbrook and the coming ‘Global Cooling.’”