Much noise has been made over the internets about “sea ice recovery” this year, along with a list of other noisy distractions, like “Global Warming stopped in January 2008” (after it stopped in 1998).  But does that mean it has recovered? Most definitely not.  The ice covering the Arctic Ocean is much younger and thinner than normal, and 2008 might in fact be a new record low.  The previous record low was 2007 which beat out 2005 (lucky #2) by the size of California and Texas combined. 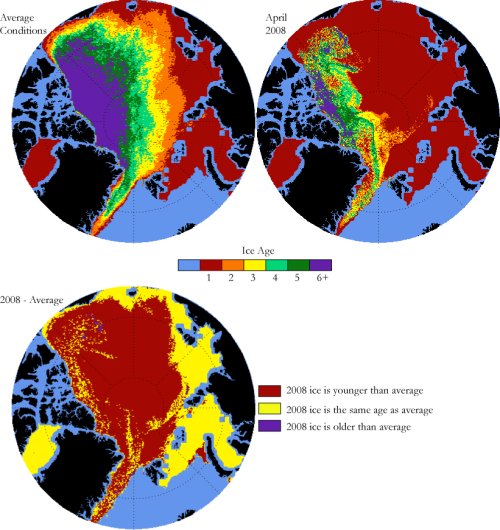 The colors are ice age, with green and purple being older ice, 5 and 6 years old. The older ice is rapidly being lost.

Meanwhile, Colorado researchers say there is a 3 in 5 chance that 2008 will have a new record low. Mr. Atmoz also has a post on this.

It is my non-quantified opinion that we’ve hit one of the first “tipping points” as far as global warming is concerned, or at least we will over the next few years– a commitment to seasonal loss of arctic sea ice regardless of what we do to CO2 emissions. We’ll be able to see by autumn if summer ice hit a new low, so stay tuned.