It is very difficult to quantify the effect that aerosols (acting as Cloud Condensation Nuclei) have on cloud albedo. Increased CCN should “brighten” clouds, that is, increase their albedo (for more on the importance of CCN see my last post). Fewer CCN means optically thinner, lower-albedo, and shorter-lived clouds, which should warm the planet by decreasing the amount of incoming sunlight that is immediately reflected back to space before it can interact thermodynamically with the climate system.

During the Cretaceous (~100 mya) temperatures were considerably hotter than today, being around 35 C (nearly 100 F) in the tropics, and the polar latitudes featured well above-freezing winters. Warm climates like that of the Cretaceous tend to have smaller pole-equator temperature gradients than the present, while colder climates like that of the LGM have much larger temperature gradients, what many call ‘polar amplification.’ It is fairly well known that a warming climate (such as one we are getting as we approach a doubling of carbon dioxide) features the poles warming more than the low latitudes. It is believed that CO2 levels were around 4 times what they are today during the supergreenhouse of the Cretaceous, a time when palm trees were in Canada, and crocodiles on Hudson Bay, and at least one published estimate of Arctic waters over 20 C. For those who argue that negative feedbacks are going to save us from an increase in CO2 in modern times, the Cretaceous is not a supporting paleoclimatic example. In fact, temperatures from proxy records are even higher than one would expect from a quadrupling of carbon dioxide. There is still a lot of confusion that the Cretaceous causes amongst scientists today. The very low temperature gradient is one example.

More question marks arose by a paper by André Bornemann and others suggesting that there in fact was some Antarctic ice during the Cretaceous time based on excellently preserved fossils showing that the geochemistry of the ocean had changed in the same way as it should if large scale glaciation takes place. Ray Pierrehumbert has good insight into some of the questions and interesting points going on during this time period, here. But no doubt it was very hot (and we also can’t talk about the Cretaceous as having just one set of conditions since it represents some 60 million years of geological time). Now, in the latest edition of Science, Kump and Pollard provide more insight that can assist CO2 in explaining the steamy conditions– albedo change from decreased CCN caused by biological impacts.

According to the study, reduction in Cretaceous cloud cover stemmed from a drop in cloud condensation nuclei which further amplified temperatures. If CO2-induced warming during the supergreenhouse reduced global biological productivity by temperature stress, and fewer nutrients to rise up to feed algae in the warm surface waters, then this could have resulted in less CCN and clouds, and thus a lower planetary albedo. Kump and Pollard use a GCM to explore the hypothesis, increasing CO2 from 1x to 4x preindustrial atmospheric level and both fail to account for the dramatic warmth (fig 1 a and b below) while 4x CO2 and increases in Cloud droplet radii and precipitation efficiency (leading to fig 1 c) would reduce planetary albedo from about 0.3 to 0.24, substantially enhancing temperatures, and a bit more in line with proxy evidence for paleotemperatures at the time. 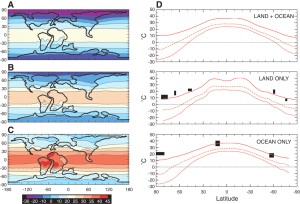 Naturally occurring or anthropogenically induced particles that promote condensation or deposition are called nuclei, and those greater than about a micron favor condensation/deposition of water vapor. Once condensation/deposition starts they become comparably sized cloud droplets, or ice crystals. With about 10 to 100-fold global reductions in past aerosol (and so CCN amounts) large increases of droplet radii (to 17 microns maybe) are possible. Decreases of aerosol concentration should lead to fewer and larger droplets, and increased rate at which cloud water is converted to precipitation (larger cloud droplets means faster conversion to precipitation and reduced lifetime of the cloud). In contrast, increases in aerosol concentrations increase the amount of low-level cloudiness through a reduction in drizzle, which regulates the liquid water content and the energetics of shallow marine clouds, and produce brighter clouds that are less efficient at releasing precipitation. This is because large concentrations of small CCN nucleate many small droplets, which coalesce inefficiently into raindrops.


The Cretaceous cloud-to-precipitation conversion rate Kump and Pollard used in the GCM was Pe ~ re3 (precip. efficiency and cloud droplet radii), with a ~30% increase in re, and an increase in Pe by about 2.2x.

A 10% reduction in cloud cover, from the decreased CCN concentrations, was caused by the biological impacts from the very high CO2 concentrations. Andreae (2007) explored the sources of CCN before the human era. There are many factors involved in CCN including primary biogenic aerosols (plant particles, spores, microbes, etc.), sources from sea spray and fires, and secondary organic aerosols (from natural hydrocarbons), as shown in the below diagram

Humans play a large role in aerosol concentrations in modern times, but in the prehuman days concentrations ranged from a few tens per cm3 in biogenically inactive regions or seasons to a few hundreds per cm3 under biologically active conditions, with similar conditions over the continents and the oceans. If biological productivity of CCN goes down, as Kump and Pollard suggest happened in the high CO2 world, there may have been less CCN and so changes in cloud cover.

In modern times, we know that anthropogenic emissions of aerosols have a strong cooling effect (by reflecting solar radiation back to space) and have acted to offset some of the greenhouse warming (Global Dimming), and aerosol rise was partially responsible for a slight cooling trend between 1940-1970 when CO2 was not yet high enough to overwhelm that influence, and environmental regulations in the seventies caused a decline in emissions. Aerosols also modify clouds, and potentially this indirect aerosol effect is much greater than the direct effect of inhibiting solar radiation to reach the surface.

However, separating “natural” from human-induced aerosol amounts is not trivial. The radiative effects of aerosols are complicated because of the direct, and indirect impacts as well as there complicated vertical changes. The “single scattering albedo” is the fraction of energy that a particle scatters compared to the amount that it both scatters and absorbs. For single scattering albedo greater than ~0.89 the aerosol particles will cool at top-of-atmosphere and below 0.89, warm. Any single scattering below 1 means that they warm at the level they reside. Aerosol always cool the surface (Black Carbon has a warming effect though), warm (if they absorb) at the altitude where they reside, and either cool or warm at the TOA.

For potential implications of this paper to modern times, we’re interested in how cloud cover changes in a warming climate, and how biological production of CCN might change. Climate models and observations suggest that cloud feedbacks may be neutral to strongly positive, and if they are negative it won’t be very strong, because observations indicate that low level clouds (which control the albedo more than any other kind) decline in a warmer climate. This is due to various physical processes like increases in precipitation efficiency or decreases in cloud physical extent with temperature. The effects of changes in CCN from changes in aerosol emissions would play a role (if aerosols decline, so should the negative radiative forcing in their direct/indirect impacts). Changes in CCN from responses in land/marine organic life are another interesting factor, and I don’t know of much work that has examined this. If the “background” CCN changes, than so should albedo because of changing cloud cover.

Speaking purely on speculation and non-expert opinion, I do not think the changes in ecology would play a very influential role in the planet’s radiative balance, at least until much different CO2 levels beyond a doubling or even tripling. The responses that shape the carbon cycle would probably play a larger role in determining the rate of change of CO2 concentration in the atmosphere. But, this needs to be further investigated, and the role of all feedbacks into models. I think the main story from the Cretaceous is that there may be some substantial positive feedback lurking in the climate system, from both physical and biological responses. It may not be wise to be playing experiments with greenhouse gases and aerosols.

This entry was posted in paleoclimate and tagged global warming, paleoclimate. Bookmark the permalink.

5 responses to “The uncloudy Cretaceous”