From parts One and Two, we’ve discussed the TOA energy balance as well as the role of the greenhouse effect, and what happens with the addition of more greenhouse gases. In the final piece of this series, I’ll discuss the surface energy budget, and simple principles of atmospheric circulation.

Several processes help transport heat from the surface to the atmosphere to help regulate this imbalance. In fact, “weather” is ultimately a consequence of unequal heating and cooling the Earth-atmosphere system which produces temperature gradients and thus drives atmospheric circulation, redistributing heat. At the surface, radiation, conduction, and convection are all playing a role. This happens through the Sensible Heat Flux (heat energy transferred between the surface and overlying air when there is a difference in temperature between them) and Latent Heat Flux (or heat transferred by evaporation of water from the surface by phase changes). The whole troposphere is well mixed in heat, and is more or less constrained by convection to stay near the moist adiabat. In that sense, the vertical structure of the troposphere is largely fixed by convection, and so air cools and expands as it rises, and you get a temperature drop with altitude. The exchange of energy between the surface and the overlying atmosphere determines the surface temperature relative to the air temperature. So, the TOA energy budget is largely the principle factor in our temperature, but the surface budget is dragged along in a secondary role to determine *the difference* between the air temperature and the surface temperature. The Latent Heat Flux is dominant because of the effectiveness of evaporation at heat transfer. During Latent Heating, one is actually adding heat to a substance without changing the temperature, because the energy is being put to changing the phase (e.g. liquid –> gas). So, for (example) a melting surface, the surface cannot go above the freezing point. The equation for Latent Heat would be

Energy flow (amount of energy in Joules per Kilogram to change the phase)= mass x specific latent heat of substance.

In dealing with Latent Heat, a condensed substance will transform into the gaseous phase until it reaches Psat, from Clausius-Clapeyron. On dry land, which has a limited supply of condensible substance (as opposed to non-condensible), evaporation can dry the land out until the consensible substance is depleted where the Latent Heat Flux approaches zero. Further of complication, is the effects of evapotranspiration due to plants on the ground, in which biological needs dictated by the biomass may influence the moisture flux. When evaporation is dominating the surface budget, especially at a unsaturated point, evaporation and sublimation leads to a cooler surface temperature relative to the overyling air.

The *net radiative* flux on the surface, which can be figured out by now is

εg will be the longwave emissivity of the ground, εa will be the low level atmospheric emissivity (we’re looking at the downward infrared flux from the atmosphere to the surface, at a layer of temperature T(sl) and the emissivity here depends on optical thickness {so, GHG concentration}, and temperature), and Sg will be solar radiation striking the ground after clouds, aerosols, etc are accounted for. This can turn the ground to be much hotter or cooler than the overlying air, and so the Sensible Heat Flux acts to decrease the temperature gradient between the ground and overlying air, and Latent Heat Flux results in the ground being colder than the overyling air, so how the three fluxes are acting determines surface temperature. For tropical air, the Latent Heat Flux and IR back-radiation from the atmosphere to the surface will be stronger than at the polar regions.

The Bowen Ratio describes how heat energy received by the surface of the Earth (from solar and IR is divided between sensible and latent heating. BR is given by,

This depends upon surface moisture. One will get significantly more evaporation over an ocean than a desert, so when the surface is dry, the Bowen Ratio and temperature is higher. If the Sahara Desert surface could be made moister, it would cool. Conversely, the Bowen Ratio will be lower over an ocean. The latent heat of water vapor is converted into sensible heat in the atmosphere with vapor condensation, and the condensed water returns to the surface through precipitation.

The same principle of radiative imbalance applies to the equator-poles as it does to the surface-atmosphere. Solar altitudes are higher in the tropics. That is, sunlight is more direct. This results in poleward heat transport from air mass exchange, ocean currents, and storm systems which act to reduce the temperature gradient between the equatorial regions and the poles. During cyclones (e.g. a hurricane) mass releases of latent heat work from the equator to the poles, as water evaporates from the warm ocean surface, and when the storm travels to higher latitudes the water vapor can condense into clouds releasing latent heat into the troposphere.

Atmospheric circulation is largely driven by the above principles (release of latent heat, convection). This drives a lot of ocean circualtion from the impact of wind on surface waters. Wind is a process which distributes unequal heat in the atmosphere, and the trade winds, westerlies, and polar winds all influence climate. On a smaller level, topography (like a mountain) will influence circulation patterns which influences nearby climate. Because of unequal heating, you get differences in air pressure and redistribution of heat in a convection cycle. When air is warmed, it expands and rises, and creates an area of low pressure. Conversely, cooler air becomes denser and sinks and creates an area of high pressure. Air flows from areas of high pressure to those of low pressure as to eliminate the gradient.

In a lower pressure zone at the equator (equatorial low), hot air rises until it is stopped at the tropopause (boundary between troposphere and stratosphere), and then spreads north and south. In what is known as the Hadley Cell, the air reaches the tropic of cancer and tropic of capricorn (around 30 degrees N and S) and descends producing high pressure, and hot-dry conditions. In fact, most of the worlds major deserts are actually in these “belts” at 30 degrees north and south of the equator. Air flows outward from these subtropical highs and moves to the equator or the poles, but not in a “straight line” because the Coriolis effect (which is a deflective force due to the rotation of the Earth where winds are deflected to the right in the northern hemisphere, and left in the southern hemisphere. Contrary to what you may have learned in high school, it is not responsible for toilet or sinks twirling in different directions in different hemispheres).

The trade winds converge at an area at the equator known as the intertropical convergence zone (ITCZ). North and south of the subtropical highs, the westerlies (winds which flow from the west to the east) are generated. Cold air sinks at the polar latitudes and spreads toward the equator as easterlies. Surface Westerlies meet and override polar easterlies along the polar front.

Heat is also distributed by ocean currents. The wind and tide driven Gulf Stream transports heat from equatorial regions to higher latitudes. It is a current in the Atlantic from Florida and goes up the East coast of the United States, and crosses the Atlantic. The concept of a thermohaline circulation is also associated in discussions, but there is generally a lot of confusion between “Gulf Stream” and “Thermohaline circulation” (THC) and “Meridional Overturning Circulation.” (MOC). Density differences in the ocean water depend on differences in temperature (thermo) and salinity (saline). Cold, salty water like that in the Antarctic is denser than warm, salty water and tends to sink beneath it and move to the equatorial regions, while warmer water moves toward higher latitudes. Please note here- The term ‘thermohaline circulation’ refers to a certain driving mechanism, which is distinct from the tidal or the directly wind-driven circulation where thermohaline surface fluxes play a crucial role, even if they do not provide the energy. The “Gulf Stream” will not shutdown unless the Earth stops getting wind. “THC” is driven by fluxes of heat and freshwater across the sea surface and subsequent interior mixing of heat and salt, with minimal effects from geothermal sources below. MOC shoul be used when discussing meridional (THC involves zonal) flow, and includes wind-driven and thermohaline forces. “THC” is not a measurable thing, but a physical and conceptual idea. For fans of the Day After Tomorrow and those who insist we are headed toward a big ice age (which is all wrong), at least say “MOC shutdown” and not “Gulf Stream Shutdown.” 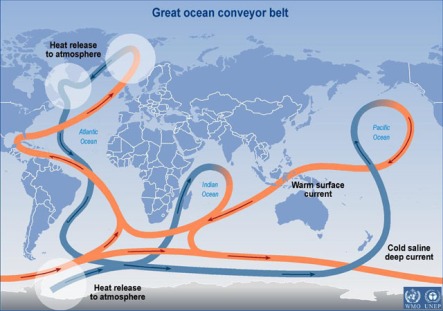 This entry was posted in scientific basis. Bookmark the permalink.